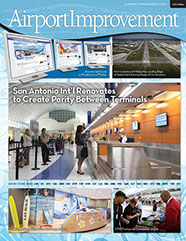 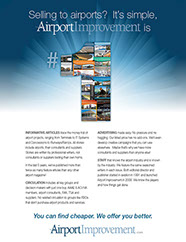 ​“Chad has been able to internalize who we are in the marketplace and what sets Airport Improvement apart from the competition. I think we share a common vision on how to accomplish these goals.”

airport magazine offers creativity and value for its readers and advertisers

It was a risky move when Paul Bowers, owner of Chapel Hill Communications, decided to launch a brand new magazine targeting airport executives. Bowers says, however, it was a “no-brainer” to bring Becker 505 on as the publication’s graphic designer. “It was a very easy decision because he’s so easy to work with and does high-quality work,” adds Bowers. Both moves paid off and today Bowers’ magazine, Airport Improvement, is consistently ranked above its competitors for editorial and style.

It’s really not a secret that airport field or terminal projects rank pretty low on the average person’s “must see” list. Chad Becker, owner at Becker 505 Creative Design Studio, is able to make concrete and deicing facilities appealing to the magazine’s readership.

Bowers says Becker also can translate a spoken idea into a visual reality, in a short period of time. “I have a certain vision for things,” says Bowers. “But, I’m not in the position myself to do anything graphically, whether a logo or layout for paper.” Becker 505 became an instrumental team member since the launch of Airport Improvement, creating the overall brand image which has been carried through to this day.

“He is able to help in virtually every area of the business,” says Bowers of Becker, explaining that the need for graphic design extends beyond the magazine’s print pages. Becker’s business delivers graphic design for Airport Improvement, magazine promotional materials, as well as graphics/images for the web site. Bowers says he also sends the digital files to the printer and digital magazine company each issue.

Becker 505 also creates ads for Bower’s clients, and does a nice job of blending print and electronic media messages, this publisher raves.  “The neat thing is that Chad doesn't have one singular role,” he continues.

Bowers’ needs to keep his clients, the advertisers, happy and engaged. Bowers likes the added value Becker 505 offers his customers, as this design firm creates approximately 20 percent of the print advertisements for each issue of Airport Improvement. This publisher explains that the advertisers love Becker 505, and many times, the graphic design firm has become an extension of their own graphics’ departments. Bowers says this alone is a wonderful reflection on the magazine and an extended service advertisers greatly appreciate, especially those with limited graphics’ skill or accessibility.

“We make it easy for them to advertise,” says Bowers. “With some, getting them to run an ad isn’t an issue of whether the magazine is a good fit, but instead, they don’t know where to start on their own to design one. Chad and I team up and become their agency.”

Bowers says his job is made easier in knowing the layouts of each of the magazine’s seven yearly issues will be appealing and easy for readers to comprehend. His objectives include: happy readers and happy advertisers. “With his involvement, we are able to meet both of those,” says Bowers. “I want to have involved readers who like reading the magazine, and more advertisers because of that.”

In the future, Bowers wants Becker to simply continue doing more of what he's been doing, and adds that his job would be a lot harder without a team member like Becker 505. “Chad has been able to internalize who we are in the marketplace and what sets Airport Improvement apart from the competition,” says Bowers. “I think we share a common vision on how to accomplish these goals.”

As on any team, Bowers says it's important to keep each other’s best interests at heart, and he doesn’t doubt for a second that Becker “has his back.” Lacking an ego and boasting the ability to address changes without difficulty are qualities Bowers says stand Becker 505 apart from the crowd.